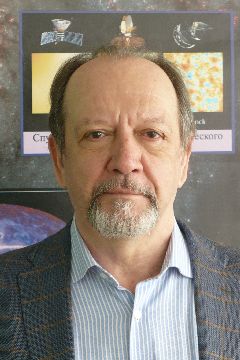 Chervon Sergei was born in 1953. He graduated from Kazan State University with a specialty in «Physics» in 1979. Chervon Sergei defended his Candidates Thesis (Ph. D.) in 1986 and he defended his Doctor of Science Dissertation (superior of Ph.D) «Nonlinear fields in the theory of gravitation and cosmology. Geometric methods and exact solutions» in specialty on 01.04.02 – Theoretical physics in Dissertation Council of Tomsk State University in 1998. He was awarded the title of Professor of Theoretical and Mathematical Physics in 1999.

Since 1993 Chervon S.V. has been cooperating with International Scientific Centers and Institutes of India, Germany, Brazil and South Africa as a visiting professor. He has been taking part in international Gravitation and Cosmology conferences in Russia, Germany, India, France and Italy. From 1993 to 1994 Sergei Chervon was on sabbatical at Inter-University Centre for Astronomy and Astrophysics (Pune, India) to perform the scientific work and prepare a doctoral dissertation. In 1995-1997 he participated in the implementation of the joint project on astrophysics with the cosmological group of the Potsdam Astrophysical Institute (Potsdam, Germany) with the support of German scientific foundations. In 1998-2000 Chervon S. V. worked in the framework of an educational program in cooperation with the University of Duisburg (Germany). In 2003-2004 he was invited for pedagogical and scientific work to Federal University of Paraiba, Brazil. Sergei Chervon was conducting scientific seminars for the cosmological group and lectures for graduate students. Since 2008, on a regular basis, he has been cooperating with the Astrophysics and Cosmology Research Unit of the KwaZul-Natal University (Durban, South Africa).

Chervon S.V. is a member of the editorial board of the international quarterly journal "Gravitation and Cosmology" since 1998. He is a member of the Organizing Committee of the Russian (International) Gravitational Conferences RUSGRAV-10 – RUSGRAV-16, conducted by the Russian Gravitational Society since 1999. Sergei Chervon is the initiator and organizer of the international schools-seminars on theoretical cosmology held in Ulyanovsk since 1997. He is the editor of Abstracts (1997, 2000, 2003, 2011 and 2016) and co-editor of Proceedings (2004), published in the international journal "General Relativity and Gravitation", v. 36, N 7, July 2004. Since 2007 Sergei Chervon is the co-editor in its field (gravitation, cosmology, astrophysics) of the journals of the American scientific society Advanced Science Letters and since 2012 - Quantum Matter. With the active participation of S.V. Chervon, the 14th Russian Gravitational Conference - International Conference on Gravitation, Cosmology, Astrophysics, as well as the 4th and 5th Ulyanovsk International School-Seminar on Theoretical and Observational Cosmology in 2011 and 2016 was held on the basis of the USPU.

In 1997-2003, Chervon S.V. was the scientific leader of the projects of the Russian Foundation for Basic Research and the "Universities of Russia" (Section Physics, Microphysics and Cosmology). In 2006-2007, he headed the RFBR project on the translation into Russian of the textbook by R.M. Wald "General Relativity". In 2008-2010 years, he was the head of the Russian-Indian scientific project in the framework of cooperation between the Russian Foundation of Basic Research and the Department of Science and Technology of India. In 2011, he was the head of RFBR projects for the 14th Russian Gravitational Conference and the 4th Ulyanovsk School-Seminar for Theoretical and Observation Cosmology.

Since 2009 Chervon S.V. has been working as a professor and chief researcher at the Ulyanovsk State Pedagogical University. Postgraduate studies and a master's degree have been opened under his leadership and a scientific direction on the theory of gravitation, cosmology and astrophysics has been organized. During this period, his followers defended five Ph.D. theses.

The main scientific achievements of Chervon S.V. with followers and co-authors are: